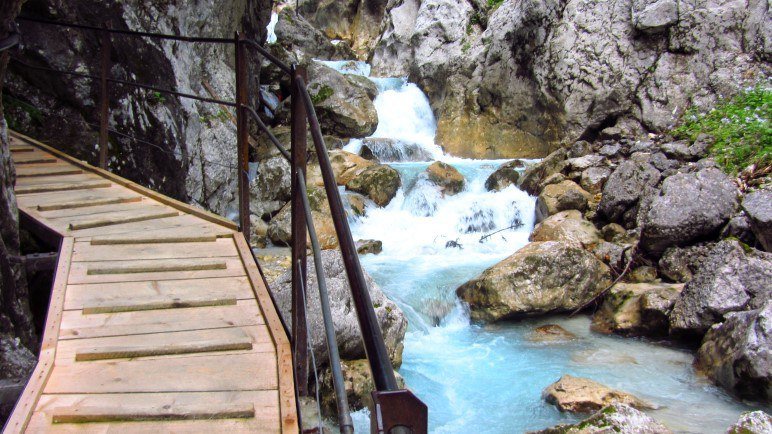 What is a gorge (German: Klamm)?

A gorge is a deep cleft between cliffs resulting of the erosion activity of a river over geological time. It takes centuries to Nature to dig its way through the rocks to form one: maybe that is the reason why gorges look so beautiful! The sharp sound of water flowing through the stones, the irregular surface of the rocky walls that embrace the river, the refreshing coolness in the summer heat... how not to feel in peace in such a place? There are several gorges in Bavaria and they are all gorge(ous)!

Partnach Gorge (German: Partnachklamm) is the most famous gorge in Southern Bavaria. It has been incised by the mountain stream Partnach in the Reintal valley near Garmisch-Partenkirchen. The gorge is 702 metres long and, in places, over 80 metres deep. It was designated a natural monument in 1912. 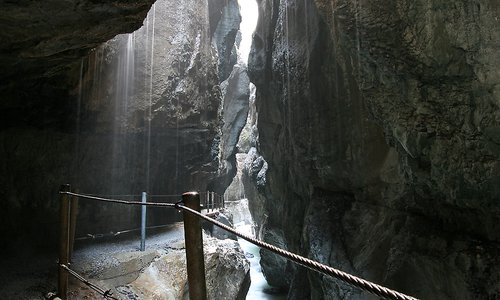 The proximity to the town of Garmisch-Partenkirchen and the ease with which this gorge can be reached by public transport make it one of the most visited hiking places in the area, counting about 200.000 visitors a year.

If you drop nearby and you need some refreshment on a hot sunny day, do not hesitate to visit the gorge! The 5€ entry fee (summer: 8am-6pm; winter: 9am-5pm) is totally worth it. The gorge is beautiful in winter too, with ice stalactites hanging over the frozen rocks, but it might be closed for some periods due to excess snow. It is advisable to check the official website for opening information.

The Hoellental Gorge (German: Hoellentallklamm) is a true beauty of Nature. Nested at the beginning of the Hoellental, close to Hammersbach, it extends for over 700 m as the Hammersbach stream flows furiously through a very narrow (width estimated 2 to 5 m) and high (depth of about 150 m) canyon. Close to the entrance it is possible to learn more about the history of the gorge in the Hoellentalklamm Museum.

At the top of the gorge, the terrain slowly becomes more spacious again. Beyond the gorge, the path leads to the Höllentalangerhütte, which lies in a gravel covered valley with sparse vegetation. From there, several paths lead to Zugspitze, the top mountain of Germany. 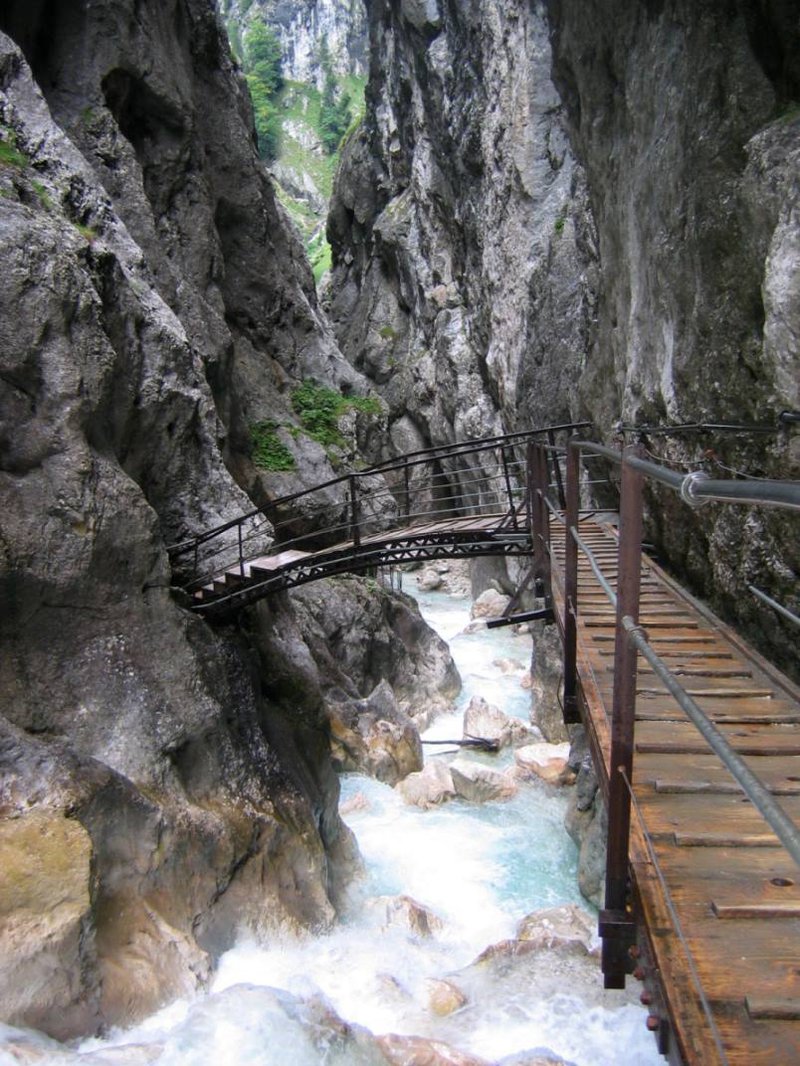 The tourist development of the gorge began in 1902 under the direction of the engineer Adolf Zoeppritz and some local mountain guides. On August 15, 1905, the Hoellentalklamm was festively inaugurated. 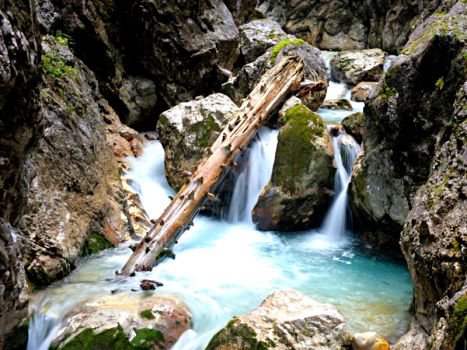 Check out more about this beautiful gorge on the official website.

If you feel a bit adventurous, he Leutasch Gorge (German: Leutaschklamm or Leutascher Geisterklamm) is what's right for you! Close to Mittenwald, it is a very steep-sided gorge created by the Leutascher Ache river. The visit is recommended for people who are not afraid of heights but the metal walkway is very sturdy and safe. 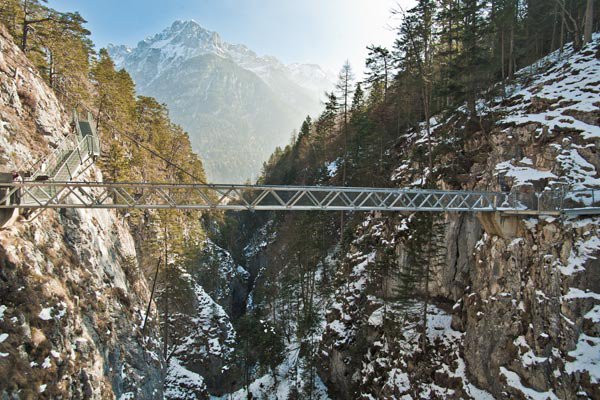 The gorge was opened to the public in 2006 and hosts lots of tourists every year. For further information, you can check out the official website. 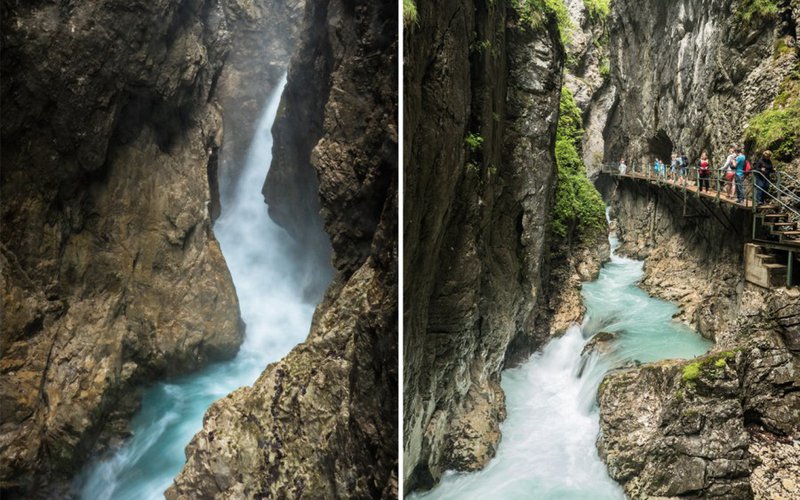 If it is about lunchtime, you can stop at the Ederkanzel restaurant (1184 m) on a mountain ridge above the Leutasch Gorge, a place geographically peculiar. Whilst the dining room and toilets are in Germany, the terrace of the restaurant lies on Austrian soil. The official boundary stone, which marks the border between the two countries is by the door to the terrace on the outer wall of the building.

The Breitach Gorge (German: Breitachklamm) is a gorge created by the river Breitach in the Allgäu region in Southern Germany. It is located at the exit of the Kleinwalsertal near Tiefenbach, a city district of Oberstdorf.

It is one of the deepest gorges of the Bavarian Alps and the deepest rocky gorge of Central Europe. The Breitachklamm was formed only during the last 10,000 years after the Würm ice age. Glaciers had eroded soft rocks, and hard rocks remained. When the glaciers had melted, the Breitach river had to grind its way through the hard rocks, over a distance of 2.5 km and up to 150 metres deep. 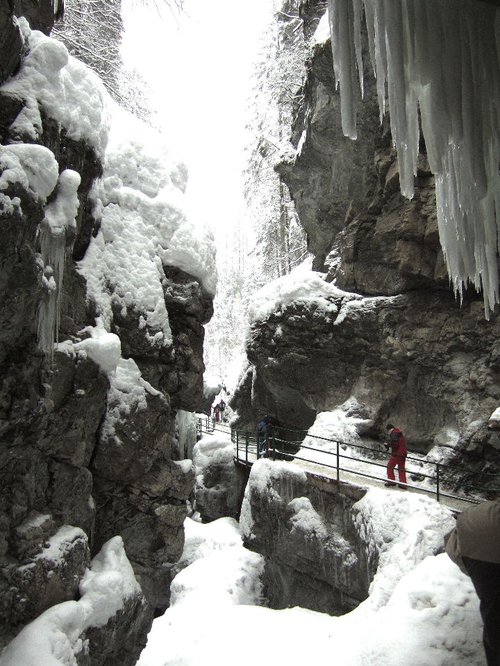 In 1905, this natural wonder of attractive beauty and dimension became accessible with the help of the priest Johannes Schiebel from Tiefenbach. Today, the Breitachklamm fascinates more than 300.000 visitors per year. Check out more on the official website.

All similar, all different. Gorges are truly astonishing places. So now that you see how much choice you have, what's the next gorge you will visit?